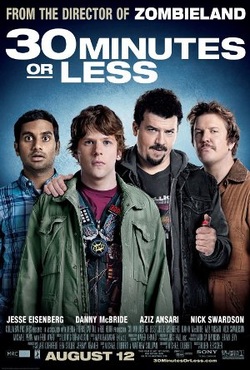 In 2003 a pizza boy in Arizona was strapped with a bomb and told to rob a bank, unfortunately when he alerted the police the bomb went off and killed him. When I first found out that a film was being made along similair lines (pizza boy, bomb strap, rob bank) I thought holy s*** that is going to be a dark as s*** movie. It isn't. The writers could have gone daring and dark with this but said they were only "partially aware" of the 2003 bombing (so this film wouldn't appear to be in bad taste I assume) so what we get is a pretty good comedy with some good acting but an altogether throwaway film. Which is a shame because the team of Eisenburg and director Ruben Felischer brought us one of my favourite films of 2010, Zombieland

Anyway after that dark, depressing introduction its onto the film itself. Jesse 'The Social Network' Eisenburg in almost certainly his rudest role to date spouting lines like "You're twins, did you feel it when I was f***ing her?" and I have to say it doesn't suit the fellow. He's unfortunately adopted Michael Cera-itis where he seems born to play the socially inept role. Unfortunately the film just kind of tells you that Jesse is a f*** up but this film is short, I mean really short, like hour 15 short so any hopes and aspirations of true character development or emotional investment in anything he does goes out the window.

The film could have done with being spread out a little more, it seemed crammed and disjointed but whilst there are negatives there is a lot of humour to be had from the film, you just have to not take it too seriously. With sex jokes thrown in there seemingly for the sake of it I guess just to distract the viewer from realising that this is actually a pretty disturbing, serious situation that the lead character is in. Also Danny McBride is pretty funny.

Unfortunately a film with potential that squandered a lot of it when it traded any form of seriousness it might of have for out and out humour. It might have been better if it had been a bit longer and flowed a bit better, 6 out of 10 for that one. Better way to spend an hour 15 than having a bomb strapped to you anyway.
Powered by