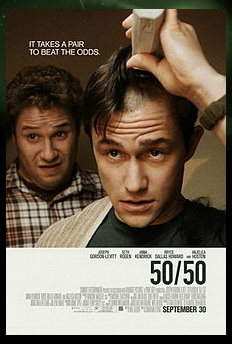 Well this is interesting; a film about cancer that doesn't make you want to curl up into a ball and cry. I mean the "man gets cancer" film has been around for a while and has been done a number of different ways but an comedy film starring Seth Rogen that had the working title I'm With Cancer, I don't think anyone could have predicted that. A film starring Seth Rogen about cancer that is getting rave reviews from critics? A few years ago I'd have thought that as likely as Mel Gibson converting to Judaism, but it's happened. The cancer thing not the Mel Gibson thing.

The film itself doesn't have much going for it in way of plot and in fact that isn't where the heart of the narrative lies. This films all about the acting, the subtext and the humour. It follows Levitt getting a rare form of cancer and browsing the internet to see he has a 50/50 (That's the title!) chance of survival. In an interesting turn of events at no time does the film get preachy and in your face about Levitt's strength at getting through this like most cancer films would. It just shows how a normal person would react.

This sets it apart and actually makes for a very enjoyable film. Rogen is on form as the loveable comic relief (when is he not), Levitt is brilliant as the somewhat emotionally numb lead and the supporting cast really do perform. There is a love story in there that feels like there should have been a bit more time allocated to but that's hardly too much of a flaw because any longer and the film could have dragged on.

The funny bits are pretty funny with awkward humour from the romantic interest all the way to frat-boy laughs from Rogen such as talking about "froggie style" but there is real emotional depth to the film. Levitt's devotion to the role (he actually shaved his head for it) shows and I really felt the character develop throughout the movie which is really a plus.

The parental relationship that forms somewhat of a sub-plot to the film is where it really shines. Angelica Houston plays the over-bearing mother to perfection whilst the way that the writers portray the Alzheimer's his father has is heart-wrenching along with Joseph's worsening physical and mental state. The film also deserves commendation for the partnership of Levitt and Rogen feeling like true friends and their rapport is spot on.