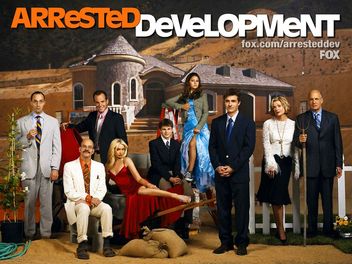 This show was the funniest thing on television. Mattman comes out with a controversial opening line and everyones freaking out? Perhaps, but it needed to be said because this show is criminally unknown in England. From 2003-2006 a show named Arrested Development following a rich family who lose their money aired on Fox to critical and audience acclaim. It was lovingly nurtured for 3 seasons and then due to low viewing figures (due in part to Fox's terrible marketing and distribution attempts) it was cut off brutally.

I think it is therefore my duty to inform you that you must watch all 3 of these series before 2012? Why 2012 you may ask? Maybe because this brilliant show has been rumoured to be becoming a film with half the script already written and all the actors on board. This is why I believe it is my duty to prepare you for this monumental occasion by forcing you to watch Arrested Development in its entirety.

Each character in their own right brings incredible comedy to the table, Will Arnett's brilliant magic obsessed GOB, Justin Bateman's brilliant straight man, Buster's incredible naivety, Tobias Funke's questionable sexuality ("I decided if i blue myself early I'd be nice and relaxed") and many more. There are some brilliant guest appearances throughout the season and ridiculously quotable lines throughout. If you are a Michael Cera fan you also have to watch this film just so you can see how Cera developed the character he used in pretty much every film he's been in since. If you aren't a Cera fan, you have no soul, and also there is too much humour in this show to let you miss out. The only flaw I can think about this show is that it tends not to juggle emotion with humour, it just piles on the humour to sometimes make serious points. You won't get any scrubs style emotional episodes, but you will get completely hooked and want to keep watching.

This review may not be detailed, but that may firstly be because it is very hard to review a pure comedy without giving away the jokes, of which there are many. It may also be because this is not a review, it is a plea to watch this show. I'm not the only one passionate about this show as there is even a website dedicated to this exact thing; http://www.the-op.com/saveourbluths/. Watch this thing and then we can be friends. Peace out ******s.
Also I give it 10 out of 10 out of 10 out of 10
Powered by