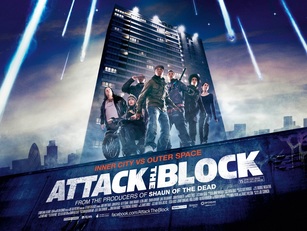 Emblazoned on all the posters and advertisements of Attack the Block are the words "From the producers of Shaun Of The Dead". This statement alone pretty much lets you know what you're getting yourself into, but don't be fooled this isn't Shaun of the Dead with aliens. In fact, if anything it is Shaun of the Dead's snotty, rude, vicious younger brother.

This film has currently been making a lot of noise, even in America where I suppose much of the slang and accents are lost. One critic even compared Attack the Block,Cornish's first effort, to Reservoir Dogs, Quentin Tarantino's first. One might ask themselves whether or not this admiration is warranted and in short yes it is, in long yeeeeees iiiiiit iiiiiiis. Whether or not this film will stand out as a British cult classic, much like Shaun of The Dead, only time will tell but it certainly has much the same praise following it that that film had.

Attack The Block has a multitude of unknowns leading its cast with the only truly recognisable face being that of Nick Frost's criminally underused gentle drug dealer. It takes a while to be able to decipher all the different characters' personalities but by the end each character has become just that, their own fleshed out character as opposed just being a stereotypical viewpoint of the urban youth.

The film itself is not so much a homage to alien invasion films but it more completely resets the genre of what is expected in an alien movie. This is shown through the aliens themselves who are like no monster I have ever seen in a  film. They are completely black,blacker than one character's "cousin Jerome", and have neon coloured teeth that can be seen from a distance. This lack of detail creates possibly the best creature through the way it moves,thinks and looks.

Also this may be because I was slightly intoxicated at the time of viewing but Attack the Block builds up to one of the most "Fuck yeah" last stands in recent movie history. It builds up into a sort of twisted coming of age tale where characters learn that actions have consequences and that the arrogance and aggressiveness of youth can lead to severe consequences. whether this is a satire on modern culture or if its just a coincidence, it makes for a bloody good film that I will probably see again soon completely sober. I recommend this film to anyone who likes their comedy with a bit of heart, wit, "blud", "bruv" and "ya get me"s.
I award it 9 out of 10!
Powered by