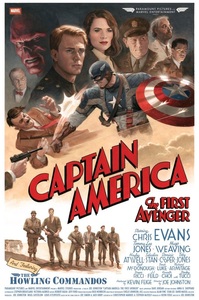 This may not surprise all the readers of this site but I consider myself quite the nerd. I do have a confession to make though; I have never read nor watched anything with Captain America in prior to watching this film. I knew a small amount about him but to catch you up on the character if you, like me, didn't know that much about him here goes.

The lad was a skinny little thing who wanted to war so the government decided to make him a super soldier with super-serum (NOT STEROIDS!!!). He then was established as a symbol of the American fight against the Nazis back in 1939. If any of you know your history you might be a bit surprised at that because America wasn't even involved in the WWII back in 1939 but by 1941 when America had been more dragged into it he was already punching Hitler. After the war finished the Cap has been constantly updated and cloned and killed etc and is now coming up in the present day in the new Avengers movie (which is going to rule). Anyway enough about him, to the film!

Film starts with a team finding present day Cap'n frozen in ice, this isn't a spoiler as it happens in the first 3 minutes so I assume I can talk about it. We then jet back to the origins of the Captain including some very weird CGI skinnyifying of Chris Evans, to show how the little guy with the heart and spirit of a hero got made all big and muscley and punch nazis in the face.  Now if you are looking for a historically accurate WWII story, this is actually as close as you can get apart from the obvious limitations of superpowers, laser guns and Hugo Weaving having a Red Skull for a face.

This is what superhero films should be like to be honest. It's gritty in the sense that the action is relatively brutal, but also upbeat in its message and can be beautiful in its cinematography. It doesn't hurt that the cast may be some of the best put together as of late. Chris Evans rocks the shy timid "never back down" Cap, Hayley Atwell plays the love interest brilliantly, although for a strong female character (she punches a guy in the face who hits on her) she seems to buckle and fall insanely in love with Cap a bit too easily. Tommy Lee Jones kills it in this film as a war weary general as this seems like the part that he's destined to play along with Dominic Cooper's Howard Stark's (Iron Man's Dad) wisecracks and Hugo Weaving's epic Nazi menacingness. One of the main soldiers also has a handlebar moustache, so there's that as well.

It does have some flaws, the plot doesn't actually make some sense at points but this may be due to it not being a self-contained movie seeing as its part of the films in the run-up to the avengers. The whole plot it actually to get something from another movie that's never explained in this one. The Captain is almost too heroic and his flaws seem to be that he's just too damn dedicated to his country which can grate a little but, like Superman, that's the way the character has always meant to be.

In Conclusion, this film was pretty sweet if you like your films comic booky and your action shield-in-the-facey but I wouldn't recommend the film if you haven't or aren't planning on seeing the Iron Mans, Thors and maybe even the Hulks. I give the film a patriotic 9 out of 10!
Powered by