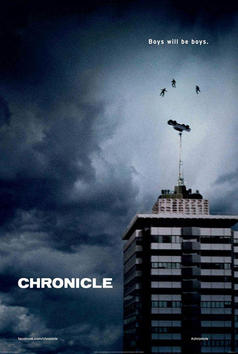 There are two things that the film industry is churning out with reckless abandon at the moment. Superhero films and "found footage" films. Both have their excellent films (Dark Knight & rec. respectively) and also their terrible films (Green Lantern & Paranormal Activity...c'mon that film was shocking) but not until now have the films been combined to create...a superhero found footage film!

This film is a relatively independent affair with unknown actors and director with a relatively simplistic concept behind it. Teenagers get superpowers. That's obviously the pitch and what the makers of the film went from until someone notified them that they didn't actually have any form of coherent plot, so they decided that (some form of SPOILER ALERT here btw) that one of them would just become a dick.

The film starts with an outcast filming everything he does until his cousin and a popular guy find some random thing in the ground and then get superpowers. Is this discussed again throughout the film? Not really. They just kind of accept, "oh we're magic now, no need to question the implications of that" and to be fair that's what the film goes with throughout most of its run time because as that poster over there says "boys will be boys".

As I mentioned before plot may be where the film is somewhat lacking as it never seems to flow, although you do start to feel at least some connection to the characters until bloody angry boy comes in and does an angry all over the place. It's an interesting concept in a way, I mean we've seen the transformation of a do-gooder to an eviler in films like X-Men First Class which was all good, but even then the villain ends up being morally questionable as opposed to straight evil. Here we see the complete evolution of a shy kid to a raging maniac.

I mean it may be a take on things like the Columbine shootings etc where a kid just takes so much crap that he snaps and goes crazy...but this time with superpowers. The superpowers themselves look pretty cool most of the time with one of the most epic finale fights I've seen, especially with an independent budget, although every time the superheroes fly,they might as well be wearing a harness or getting completely CGI'd. No ones really found the best way to simulate flying and not make it look unreal yet, I mean apart from like birds.

I'm already a fair chunk through this review and we haven't talked about the found footage part of the film. This is where it gets a little weird and experimental. The filmmakers obviously wanted to show all characters on screen at times so to do this they decided that crazy guy filming, because he has telekinetic powers, sometimes decides to just make his camera hover around a bit. Then in some moments it takes perspective of other people's cameras which gives it a kind of peep show vibe. Does it work...kind of, it's interesting to say the least but at times it kind of just shows the limitations of the special effects by shaking the camera around so much that you can't truly tell whats going on.

Chronicle is interesting, but in my opinion its almost too far away from a finished product. The characterisations seemed a little off, although the whole concept intrigued me so much it forced me to enjoy it. You kind of have to see this film simply for the finale where bad-assitude occurs and s*** goes in a  very downward direction. 6.5 super-points out of 10.
Powered by