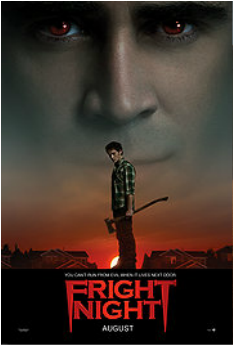 When did vampires stop being vampires? How did badass demonic folklore from 18th century Europe become f***ing sparkling? Why does Twilight suck so bad? All of these questions have been rattling through my head of recent times and caused me to be somewhat wary of Fright Night. Although it is indeed a remake of an awesome 1980s horror film I thought that they might "Edward Cullen" up the vampires a bit or throw in unnecessary teenage angst. Alright well there is some teenage angst in there but this vampire is a vampire. He doesn't f***ing sparkle he bites you and tries to blow up your house.

Our story starts with Anton Yelchin as a nerd who has suddenly become popular because he's porking the popular chick. Well not porking, just seeing because we all know in horror films porking leads to death. His old nerd friend who he's trying to get rid of tells him his neighbour's a vampire (spoiler:he is) and s*** hits the fan.

The film follows a slow reveal, chase then ass kicking finale which means that yes this is a cliche horror film, but it knows it is so it has fun with it. If you guessed that at some point during the film Yelchin decides to man up and buys a variety of vampire killing tools in search of Mr Farrel then congrats you get a gold star for having seen at least one vampire/monster film that isn't twilight.

The film actually flows pretty well, its not an all out horror comedy but there are some nice comedic touches to the horror. It's aware that its trying to not cater to the current "oh vampires are soo womantic" teenage perception of vampires by showing Farrel as a heartless killer(he owns this film).

The surprise star of this film is of course David Tenant, Doctor mutha flippin Who. He pops up briefly but then becomes somewhat of a lead character and of course there's a bit of character development in his story, which I always like to see. It's very strange to see Doctor Who talking about how his leather pants chafe his netherals but this film goes there.

If I had to describe the films genre I'd go for fun horror. It's not so dark that its depressing but its not as light as most horror comedies. People die, crossbows get fired and Colin Farrel goes around being a badass, he even throws a motorcycle at a car, that's hardcore. Obviously when the film came out it didn't get as much credit as it perhaps deserved because it is clumped in with the "horror remakes" that are going on everywhere but this certainly stands up on its own merit.

It gets a bloodthirsty 8 out of 10 for the gore, humour and Colin Farrel's badass self. Plus when sun hits these vampires they die, they don't sparkle, the way it should be.
Powered by