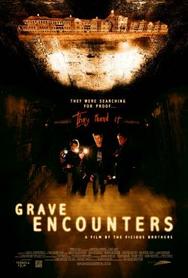 The premise is actually a pretty decent set up and makes me wonder why it hasn't been done before. The film begins with a Producer informing the audience that this hasn't been edited at all and really happened The rest of the film follows a group of "Most Haunted" types staying in a Haunted House for the night, hilarity ensues. Well maybe not hilarity but s*** very much goes in a downwards direction.

The film is at its most effective in its first half where ghosts and scares are hinted at and gets its scares by hinting at ghostly mischievousness. It's the second half of the film where the jumps are thrown in and all notion of tension and subtlety are thrown out the window. Its hard to write a review about a film that relies on scares as there's not too much to say really There are places where you will jump and there are places where your buttocks will clench with fear. This may be the only film where i can properly feel my heart rate rise whilst watching it, so if you're weak of heart best to give this a miss.

Now I seem to be loving this film but let me just get one thing straight, this isn't a good film. The characters aren't truly developed, no one can really act and the camera zooms in and out ridiculously to make up for the fact that there's only one camera. Its funny in parts, its scary in others but the second section screams out low budget. It seems a lot of the effects were simply copy and pasted in. There's one effect that happens to a girls face, which the trailer rudely gives away, which is scary but I'm pretty sure I've seen done before on mac photobooth.

But I'm not reviewing it as a film, I'm reviewing it as a horror film. If you want an enticing narrative that's more than these people are locked in a house and some crazy s*** happens, then this film probably isn't for you, go watch rec instead But in terms of scares and tension you can't go much wrong with this film as long as you decide to completely disregard logic and reality. Film-wise it gets a 5 out of 10, horror film wise it gets a frightening 9 Ghosts out of 10