Guardians Of The Galaxy Review 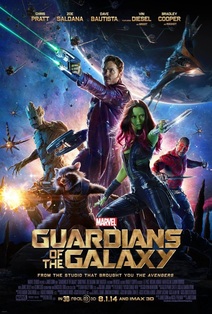 Marvel can pretty much do whatever they want now and it would make a ridiculous amount of money and be successful. They could release a movie just made up of Joss Whedon running around in lycra harassing people on the street and it would still make millions (hell I'd actually go see that). People still were unsure about marvel's power and their ability to get the best talent out there (in terms of directing, acting, CGI, catering). When it was announced that Marvel were to be making a film about a comic that no one knew, obviously people were sceptical.

Sure the Avengers was a mega hit, but everyone had heard of Lieutenant USA, Ironing Man and Sore so it was expected to do well and be pretty kick ass. But a sci film with little to no well known heroes in it seemed like a giant leap of faith for Marvel and one that could prove to be a big mistake. That's the thing though Marvel don't make mistakes, and this film f***ing rocks.

The film is an origin story of sorts following a group of misfits as they stop the bad guy from getting the MacGuffin and must work together through friendship and teamwork and blah blah blah. Sure the story is generic as they come pretty much, although there are little nuances suggesting a deeper backstory, but what James Gunn has done with such a simplistic story is fantastic. This is a balls to the walls action comedy with a lot of emphasis on the action...and the comedy.

The film thrives off character interaction so I'm thankful that everyone involved brings what can only be described as their A* game (little joke for everyone who just got their A level results there). I've always liked Chris Pratt as the loveable goofball on Parks and Rec so seeing him on the big screen ripped and cracking wise is brilliant to see and he absolutely nails the mix between danger and rougeishness.

The two animated characters Rocket Raccoon and Groot pretty much steal the show though with some brilliant voice work from Bradley Cooper and Vin Diesel with comedy and actual real surprising depth to their characters (even the one that can only say three words). The surprise turn however is Dave Bautista's Drax the Destroyer, as the Rock aside, WWE wrestlers tend not to translate brilliantly into acting (except of course Hulk Hogan's turn in Mr Nanny). But they set a trait for him (his race is literal and can't understand metaphors) and they drive the joke home again and again, and the weird thing is it's hilarious every time.

I've expressed this before that reviewing a comedy is hard because to say why it was funny would ruin the jokes but take my word for it this film has laughs in it. It is pretty much one of the best times you can have at the cinema, especially in IMAX 3D (I went to both and whilst you don't lose anything from normal 2D, that extra D is worth the money). The action isn't played for slapstick either, and it's constant meaning the 2 hour run time doesn't drag. It's typical sci-fi mixed with superhero fare, with space battles and hand to hand fighting but it's done brilliantly throughout, especially the prison breakout scene.

That's not to say the film is without its weaknesses, there's a distinct lack of time spent with John C Reilly, Glenn Close and Peter Serafinowicz as the Nova Corps but that may because the film occasionally has to introduce so many characters so quickly, so hopefully we see them in a later film (as their characters in the comics are really cool). Also the conflict between the two Alien sisters runs a bit dry and no one in the cinema was saying 'I can't wait for this fight'. That may be because Gamora wasn't really shown as the bad ass she should have (and I swear to god if they write a love story in I will kick off) and that ginger girl off Doctor Who...can't really act unfortunately. Or at the very least she played the part slightly wrong.


Review's gone on a bit long and I have more to say on the film so I'll just go into a speedfire round: Bad guy was pretty good and more memorable than some of the recents, Thanos looked a bit too crappy CGI for my liking, the Soundtrack kicks so much ass and has been playing on repeat in my house and everyone will want a Groot toy in the next few weeks (if you've seen the film you know which scene I'm talking about). Also if you aren't a true Marvel fan you don't need to stay till the very end, it's not a continuity bit like it is for all the traditional Marvel films.


As James Gunn himself said, if the Avengers was The Beatles, Guardians is the Rolling Stones. Rougher round the edges, but all the more fun for it. 9.5 out of 10.
Powered by