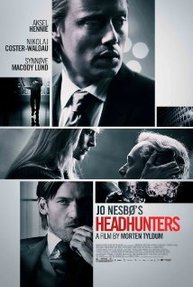 Headhunters or Hyordenjurgenburgensplurgen (Hodejegerne) as the Norwegians call it is a peculiar little film. Based on a book from the ever crazy Norwegian crime writer Jo Nesbø it seemed to be trying to coast on the back of the Girl With The Dragon Tattoo. With both of them being crime novels from over that part of the world, especially as Headhunters is getting an American remake.

Firstly, it is very little like GWTDT although it shared producers for that film. Whilst that film was a twisting epic yarn across centuries with plot twists galore and dark subject matter, headhunters is a relatively simple affair. Well, it seems to trick you into thinking it is simple and then unleashes a clusterf*** of confusion. It seems the film throws so much at you that you assume that the filmmakers have made a convoluted mess but the way they bring it all together in the end shows that the knew what they were doing, those cheeky Norwegians.

The film follows a headhunter (that’s job consultancy, not a hitman as I believed) who has a lovely house, a beautiful wife, a lovely car and he’s an absolutely contemptible b******. Seriously he may well start off as one of the least likely protagonists in recent years. Up until about half way through the film I was actually rooting for the bad guy, then the toilet scene happened and I changed my mind.

Anyway, to fund his lavish lifestyle for his wife he has a side business stealing art and selling it. When he meets the ridiculously handsome man from Game of Thrones he decides to steal his painting because “he could get bare dollar for it” as I assume the American remake will say. I genuinely don’t want to go further than that because the elements of surprise was what drew me to this film and kept me enwrapped. The absolute trauma the lead goes through and the fact that we always know exactly as much as him (which is roughly precisely nothing at most times) is thrilling to say the least.

Whilst this is very much a thriller with gleeful violence and a ruthless killer, it is more a story about mistrust and family life and actually becomes a bit of a metaphor for conducting yourself in business. The trouble the lead finds is actually stemming for his Napoleon complex (he’s 5ft 6 as he states a few times) and his unease that his wife wants a taller man, when she actually wants a kid.

A beautifully bleak film but strangely uplifting, this film is worth a watch but if you fear subtitles an American one should pop up soon (but it won’t be as good). Whilst some may be angry at the 1 hour 20 cat and mouse chase then 10 minutes of plot, I embraced it and found it one of the most interesting pieces of recent memory. It gets 8 Norwegians out of 10