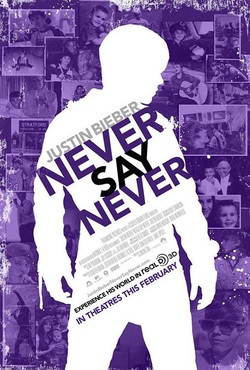 Absolutely ceebs with the Biebs. I think the aim of you guys choosing this film for me to watch wasn't to write a review about it but just so I had to endure the agony, the pain, the horror that is this movie. There is no way to review this film as a normal film because it isn't. It's a strange amalgamation of concert film and biopic about a kid thats only 16. This is a central aspect of the film because whenever you see Bieber act like a c*** you think to yourself "oh he's just 16, he's allowed to act like that" then you realise he's going to be 18 soon and will probably still be a c***. That's a predominant theme in this film, Bieber is still very much a child and the movie looks at some of the factors around him that lead to his stardom.

One recurring thing, which is never really mentioned, is that Bieber if left to his own devices only has one dance move and probably isn't a brilliant song maker. He does some random hair sweeping move every time he looks at a mirror which shows that the kid may have talent but for a stage performance he obviously needs to be directed by a huge amount of people. The most interesting part of the film, of course, is where it focuses on the fans themselves. Those absolute bloody nutters. Theres girls being taken down by security, girls breaking their legs and girls trying to get on stage while he sings...there's also one bloke in the audience who after this film is released I assume will have to turn in his man card and testicles.

Do not get me wrong, I actually don't hate Bieber although a lot of people may think I do. I don't like his music sure and I think he epitomises the overly marketed, wishy washy pop that panders to teens making this the worst generation for teens to grow up in music-wise in quite some time. Although I feel this, the kid has some talent, he's ok at piano, guitar and drums and this was before he even got his break so he's obviously a musically talented Kid. Coupled witht hat he sold out the Madison Square Gardens with one flipping album, I mean you don't have to like him but for a 16 year old to do that has to make you respect him....ish.

I have no idea how I'm going to give this a mark out of 10. I mean it was actually kind of enjoyable from a detached sort of view to see this kid rise ridiculously quickly and all the hard work the only nice person (his producer) put into everything. But it doesn't give a realistic viewpoint because of course its Bieber acting up for the camera and it gives a very Disney channel everything's lovely and warm and cuddly impression. This is because Bieber approved it so its never going to be damning in any way about him. I'd like to see the story from another perspective and show how they marketed him to the American youth as they try and pass it off as "all hard work". But with this film I kinda got what I expected and It was actually better than some films I've seen, more enjoyable than Hall Pass at least. I'm going to give it a cheeky 5 out of 10 only because I was surprised that I didn't run out of the room screaming before the film had got through the opening credits.