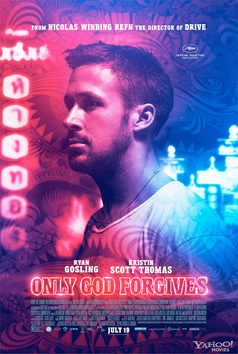 Drive was a brilliant film. It had the right mix of action to serene moments and perfectly captured the feel of its Los Angeles location. Now Winding Refn (The Drive director) and Ryan Gosling (The star of Drive and many ladies' dreams) have teamed up again to make a film that mixes action and serene moments that perfectly captures the feel of Bangko.... wait Deja Vu.

While the basis of this film seems like Refn may be replaying what worked previously (Gosling staring at people and not saying much), this film couldn't be farther from Drive.... because I loved Drive, don't love this though. Set in the city of Bangkok Gosling plays an American (probably, he only says like 10 lines) who's brother is kind of murderedish by a Thai... policeman I think... called the Angel of Vengance (I think, I had to look that up on wikipedia).

Gosling then sets out on a quest to stare everyone to death, whilst his overbearing, horrible mother (played to perfection by Kristen Scott Thomas) attempts to track down the policeman and have him killed whilst also comparing her two son's penis sizes.

Now the reviews of this film have been extremely mixed, its rocking a 40% on rotten tomatoes but with some reviews hitting 5 out of 5 and some 0. I would say it doesn't deserve the 0 but in no way is this a good film. The pacing, the dialogue and the acting are completely off, while the visuals do pick up the pace a bit there's not a lot of meat to the film. There have been many great films that have been pretty slow, or have not had a huge amount actually happen, but these films usually revolve around intense dialogue or beautiful set pieces. Only God Forgives has neither.

It's a shame because a film about the underworld of Bangkok made for Western audiences could be absolutely brilliant, and while the feel and look of Bangkok is certainly there (I've visited Bangkok and even recognised some places) the actual film part of it is lacking. I managed to see a few scenes prior to actually seeing the film and thought 'these scenes would be pretty good with some context' I then watched the film to find out there is none. There is a pretty cool fight scene which I thought would have some epic lead up but just consisted of Gosling walking up to someone and saying 'Want to fight?'

It is certainly possible that this film operates as an art film and has to be reviewed as such but I was watching it as a movie film, not as some experiemtn or as an experience. It did have shades of those random French films you see parodied in places seeing as there are jump cuts within a scene for no apparent reason. As in Gosling would be staring at someone, then suddenly they'd be by the door, then they'd be the other side of the room, then he'd be looking at his hands, then they'd be sitting down, then they wouldn't be there, then Gosling looks at a wall, then they're sitting on the bed. You can see how that would be confusing when a lot of scenes take place with no dialogue taking place.

The Thai actors tend to be slightly better and it makes you question Gosling and Thomas's inclusion. The film works a lot better as a straight Thai thriller about a renegade cop who deals harsh justice to criminals and occasionally sings Karaoke whilst police stare at him, I mean still not great just better. This film would have worked better if Refn had simply cut his ties to America film and called it 'เฉพาะพระเจ้าให้อภัย'. It wouldn't have made the splash or money it is going to but it would also have not been booed by the audience when it screened in Cannes. Also the make-up on beaten up Gosling is pretty cool but not as shocking as it looked in the posters.


Surely a divisive film, Only God Forgives squanders its potential on strange dialogue decisions and wooden acting. The experience is too strange to be considered a good film but I could see how some people may enjoy that. 4 out of 10
Powered by