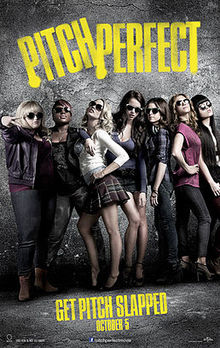 Warning: This review contains snarky sarcastic comments, If you don't want to think that I'm a bit of a nob by the end of this review or if you like Pitbull, please switch over to something else now. Like catching up on the Walking Dead in anticipation of the second half of the series starting, or doing good deeds to the elderly or get on with that thing that you've been putting off. If you already think I'm a bit of a d*** that's fine, read on.

I don't this film is aimed at my demographic. Since the overwhelming uncoolness of Glee and the complete lack of credibility it comes with graced our screens, kids and pubescent girls have been loving the terrible drama, poor acting performance and dire song renditions (yeah not a glee fan). Pitch Perfect has come around to turn that around with hip new songs and funny acting performance and puke jokes, LOL.

Well no, not really. This film was quite obviously written by someone in their mid thirties whose idea of contemporary underground dance music being Pitbull or David Guetta. The story follows a kind of Glee-goes-to-College-so-they're-allowed-to-be-raunchy type vibe which actually works for the most part. You shouldn't really be taking yourself too seriously when making a film about Acapella groups battling it out.

The film follows totally underground music DJ (DJ in this instance means playing two top 40 billboard chart songs at the same time) joining an acapella group who are stuck in their ways singing old school 'boring' songs and are resistant to any change. Well I say that but I do love the song The Sign by Ace of Base, it's better than f***ing Pitbull any day (I'm not going to let that go, SPOILER that the group win with a f***ing Pitbull song).

As this is a girl power type movie, the girls are up against the stereotypically meanie bo beeny poo poo face boys. Although they only went and developed one character for the boys team and he's the only one that seems like a douche. Also the love interest to the cool edgy underground singer is on the boys team for singing. Who would have seen that coming? Struck me for 6 that one, it's good to see Hollywood creating these crazy, new, out there concepts, like two people falling in love on teams that are against each other!

Alright I'm being a bit of a d***, you can't really fault the film falling on lazy romance and comedy principals because it's all done in jest without much seriousness in place. Thankfully the cast are actually pretty decent with some talented singers, I've even got one song Anna Kendricks plays on my iTunes, it's that damn good (although I think Pitbull might be on my iPod somewhere as well so that might not be saying much...f*** Pitbull). The songs range from a rousing No Diggity to a pretty boring 'Riff-off' (but they do it in an abandoned pool so its cool and edgy, not like that mainstream glee garbage, they sing in Halls and schools, get with the times right? All us cool university students hang out in abandoned pools at night time

The cast are OK, with standout moments from the asian girl, the douchebag, Elizabeth Banks and that guy that was on Community once. Anna Kendricks commands some sort of amiable performance but her character is so dull its hard to care for her plight. She's all 'Gawd Dad stop providing me with a free colelge education and helping me in later life, I just want to play two s****y mainstream songs at the same time!' and although she gets somewhat of a character arc it's a bit hard to care. Especially as at one point it's mentioned that she hasn't been attending studies and then its never referenced again. I would actually have loved this film if after the happy ending she got a letter saying 'you've missed like all of your classes, you're expelled'. Yeah I'm not a nice person.

Anyway, there are some funny moments, the cast do the job and the music...happens. I found myself routing for the boys so its possible this film made me discover my latent sexism. Also I have decided I don't like Rebel Wilson so I'm possibly racist against Tasmanians. Also F*** Pitbull..... 5 out of 10