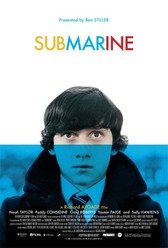 The top definition of Hipster is -"Hipsters are a subculture of men and women typically in their 20's and 30's that value independent thinking, counter-culture, progressive politics, an appreciation of art and indie-rock, creativity, intelligence, and witty banter" . Yeah that’s a pretty apt description. The film follows Richard Ayode’s first expedition into the world of directing and writing for films and he knocks it right out the ballpark even if at times it feels like he’s throwing in quirky for the sake of quirky. The film follows a school kid in Wales in the 90s and perfectly captures the drab industrial nature of Wales at the time even if it may overdo it a bit as Welsh people are actually a lot nicer than they are portrayed in this film (I have to say that otherwise the Welsh part of my family will have a go). It follows the problems of this school boy but ridiculously amplified thanks to his extreme internal monologues, jumping to conclusions and ridiculous actions.

It’s one of the smartest coming of age tales I’ve seen in ages and while it isn’t laugh out loud funny it does have some humorous quirks throughout  even if the melancholy of it all can’t fully be displaced by the upbeat cut-aways. These are prevalent throughout the film most notably where he the character sees his first week with his girlfriend as a trailer on grainy footage to a typical Alex Turner (Arctic Monkeys frontman) soundtrack. There are some brilliant acting turns, especially from the young welsh cast along with brief cameo’s from Gwen and Dave from Gavin and Stacey. It’s also good to see Paddy Consadine in a comedic role again after Hot Fuzz seeing as his usual forte seems to be deranged killer a la Dead Man Shoe’s, it’s nice to see him take a role as ridiculous as the faux-psychic who believes he can see everything in colours.

It is however Craig Roberts that carries this film as it’s his voice we hear throughout.  He allows us to see him to some horrible things (doesn’t see his girlfriend’s dying mother because…well you never really understand his motives really) but still allow us to feel empathy as everything around him falls apart, even if he does play it slightly too awkward, he seems to have a self-aware mental illness, it still comes across as charming and in the end his heart seems to be pretty close to the right place…ish. The main thing I hope this film accomplishes, especially after its stellar reviews, is that it throws Ayode into international audiences so that the Americans can see how awesome the dude is, as all IT crowd watching people should know. Not really much humour in this review, seems almost grown up and "proper"...Less of that in future

Almost too hipster and quirky for its own good but a beautifully British and melancholy coming of age tale carried by its brilliant leads. It gets a 8 out of 10...but ironically.