The Adventures of Tintin: The Secret of the Unicorn review 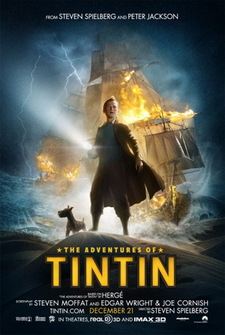 Hello internet, its been a while. To understand this film we must first delve into history and go all the way back to 1920's ish. Some French writer guy called Herve (theres a DJ called Herve as well, surprisingly not the same guy) wrote a story about a French explorer/journalist who went by the name of Tintin. This got famous and spread across the world due to its slapstick humour, sense of adventure and overt racism. Well not the overt racism bit, but it had that in buckets. Then in 2011 Peter Jackson and Steven Spielberg (two directing heavyweights) decided to adapt this into a motion-captured sprawling family epic. Did they pull it off?

Kind of. This film is ridiculously good, for what it is. That's a key phrase there and I'm going to keep coming back to it "for what it is". What it is is a film that looks great, has some crazy action scenes and is occasionally pretty funny in a "ha ha that guy fell down the stairs" kind of way. What it is not is a deep plotted film with characters who develop and are really likeable throughout.

A film that gets away with the star being the most straight laced, dull protagonist that I've seen in film and still have me rooting for him (well more the drunken captain than him but still) must be good. The plot itself is pretty wishy washy and its not really engaging but when the animation works this well and with the action is this fast paced and awesome, you don't really need a plot, but the plot obviously wasn't the focus of the two directors. They knew what the film was.

For a family film this is quite ambitious. A lot of the time you just watch in awe and think that must have taken ages as opposed to enjoying it for the film itself but that's what the film is. The film only really offers up two characters of any interest at all, well 3 but two of them look exactly alike (Thompson & Thompson, played to brilliant comic effect by good old Simon Pegg & Nick Wright).

The main character with any type of character or depth is Captain Haddock the old soak (played to mo-cap perfection by Mr mo-cap himself, Andy Serkins (Gollum, King Kong & Caeser from that ape film (there are brackets inside brackets here, bracketception))) . Interestingly for a family film, the man is drunk all the time. There's even a plot point in which he sobers up and Tintin has to get him drunk again. That's pretty funny as usually a family film would say "hey kids, drinking is bad so this guy is going to stop at the end" but it doesn't really, he just stays eternally blotto'd. I see myself in him.

All in all for what it is its an extremely polished film. The sense of exploration is grand, the action is fluid and the animation is superb but don't look into it if you are looking for something more than a bit of fun. 8 out of 10.
Powered by