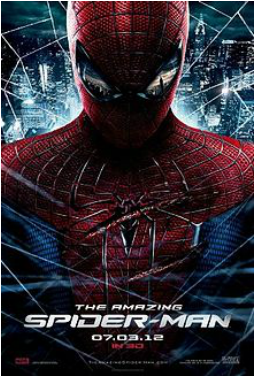 Alright to discuss the motivations to this film I've decided to create a dramatic interpretation of the Warner/Marvel people talking about it. The scene; post-Spider-man 3 in an office boardroom with lots of men in suits. "So Spiderman 3 made us lots of money let's roll onto Spiderman 4, it's Lizard time!" "Sir, Spiderman 3 was an absolute mess, maybe it would be best to do the humane thing and put the Spiderman franchise out of its misery for a little while, just to avoid embarrassment" "But....money" "You raise a  valid point sir, maybe we should reboot the franchise, but leave enough time so it doesn't seem obviously money-grabbing" "Yes, how about 4 years?" "Sir that's not exa..." "But we have to make it gritty and realistic like that Batman film" "Yes but that only works because he isn't super, in these films we have giant lizards and a man with spider powers" "Quiet I'm on a roll here; we should make him skateboard because kids love skateboards and we should make awkward teen comedy because teenagers will love that. Then we should get Martin Sheen in for the oldies and definitely get rid of that J. Jonah Jameson character because no one liked him" "Actually sir he was everyone's favourit..." "And we should get a director that we can make a pun on...is there a director called something spider? Something Super?" "There's a Marc Webb?" "Perfect"...... End Scene

So, I may have my qualms about the reasons behind this film being made (we want money) and whilst there may not be such a great need for another Spiderman film, it would be great if the last one wasn't Spiderman 3, and (spoiler alert) there isn't a dance number or an emo fringe in sight...rejoice! Whilst the last series descended into camp with frightening velocity, this series has decided to very much play it straight albeit with some pretty funny set pieces a la Peter Parker's initial teething problems.

Now Webb is an interesting choice. His only feature film to date being the (excellent) romantic comedy (500) Days of Summer, meaning that it is plausible that he only got picked because his name is Webb and Spiderman shoots webs. But it seems he is a pretty good fit for this film, adding an emotional depth that (previous franchise director) Raimi seemed to display solely through a dance number (I joke, I still love Spiderman 1 & 2). Although at times it seems that he is struggling with the film solely because it is a reboot so close to the previous reboot meaning that he has to change the Spiderman backstory so it doesn't all seem too familiar. As a Spiderman nerd (I have him painted on my wall) this took me out of the film experience a bit and so the film had a hell of a job in front of it drawing me in and making me enjoy it.

Somehow it managed it. (There will be a smattering amount of spoilers throughout the review from now on so if you haven't seen the film yet I suggest you just skip to the score, or just go see the thing and then return here) Seriously I really enjoyed this film, flaws and all. True the story seems to be overly convoluted with no pay off in the place of sequel bait and the bad guy seems to switch motivations about like an oscillating pendulum but the obvious passion that Garfield brings to the role and the fun that the cast seem to be having with it really shows.

Onto Garfield now, ever since he turned up to Comic-Con dressed as Spiderman and delivering a monologue about reading and relating to Spiderman as a kid, I've been behind the actor to play him. Even through the whole Donald Glover (Childish Gambino) "#Donald4Spiderman" campaign that even Stan Lee got behind (even though that would have been incredibly awesome). He adds more to the character than just "Superhero beats up bad guy", it's more "Superhero beats up bad guys to try and find the guy that killed his Uncle then realises that he has a responsibility to save lives and faces adversity and danger to save as many people as possible". There are times where his British accent pokes through the American-ness but all in all he does a pretty sterling job even if his angsty stuff seems a bit forced, possibly because we're seeing an actor in their mid twenties doing 17 year old angst, but that's expected.

Emma Stone owns what little part she has as Gwen Stacy although she seems to be playing Emma Stone as opposed to Gwen Stacy...but a blonde Emma Stone. Seriously she is one of the most typecast actresses in goofball romantic comedies (the likeable love interest) the Help aside. It seems that they were going to do something daring like kill off Gwen Stacy like in the comic books to really add emotional turmoil to the character but that seems to being saved for the sequel as there wasn't enough real connection to Emma's character to really care about her fate.

Action! This is where the film elevates itself slightly above its predecessors with some pretty epic action shots which accentuates the fluid movement that defines Spiderman but with big action heavy films like The Avengers around the same time, the CGI looks already slightly dated, even if it is impressive. Webb incorporates some pretty nuts, mirror's edge style first person-ness but its all too computer generated and wobbly to make out anything. There's a reason most found footage films don't focus on action, first person action rarely works. Thankful Webb limits it to only a few seconds a piece.

Now it sounds like I'm having a go here and that I don't like the film but its many flaws are made up by the way it actually where's its heart on its sleeve. It knows what it is and there is a nod to earlier Spiderman's throughout paying homage. Especially a scene of community and "the public is getting behind Spiderman" reminiscent of the train scene from Spiderman 2, which for me was the highlight of the series.

All in all a pretty slick and well performed film that will presumably set up a profitable franchise. It's found its niche in the superhero industry and the point between Batman's grittiness and Avenger's all out heroism and for that I would say its a welcome return for ol' Spidey. 8 spidey sense's out of 10. Even if there is no J.K. Simmons as Jonah Jameson...fingers crossed for the sequel.
Powered by