The Girl With The Dragon Tattoo Review 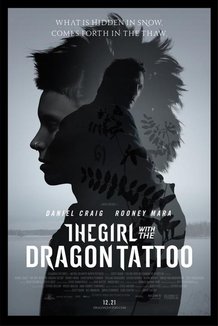 I hope you'll be glad to know I did my research on this film. I read the book and also watched the Swedish adaption of the book and I can tell you this. Don't do that. This is a film that relies on not knowing whats going to happen, on uncertainty and on unease. If you know what's coming next it seems to cheapen it a little. What I can say however is that David Fincher, the director of the English language adaption of the book, hits it out the f***ing ballpark.

At first I went in sceptically because this photo to the left was the only poster I could find without Rooney Mara's baps all on display with Daniel Craig kind of in a protective stance. If this was how the film was going to play out then I was pretty sure that Fincher hadn't actually read the story. Thankfully that was obviously down to pesky marketers and Fincher actually captures the book's themes and feel perfectly which is something the Swedish adaption didn't quite achieve.

Just so you know this film deals with some pretty dark s*** and Rooney gets naked enough times to make it an uncomfortable watch with your parents, as I experienced. The story has been described as ludicrous by some and they may be right because the amount of twists and turns that occur would make M Night Shamamalalayaham blush but Fincher manages to reign this in by cutting down on a lot of the waffle that padded out the book like unnecessary romance.

As for the acting, pretty much everyone here brings their A- game. The talk is all about Rooney Mara of course who's dedication to the role and impressive acting talent speaks for itself throughout and you really support her struggle. Equally Craig turns in a great performance as the understated, likeable but flawed character of Mikael Blomkvist. Also Christopher Plumer acts like an awesome old man filled with remorse and if anything I'd say that the film needed more of him in it, much like the books did.

One aspect that may take some time to get over is the complication of setting the book in Sweden but using British and American actors in the main. Everyone apart from Daniel Craig tends to speak English with an accent whereas Craig just tends to speak normally which takes a bit of getting used to but isn't a hindrance. Also the scenes aren't long. That might sound like a strange criticism but the plot jumps around so much that scenes can't really be given time to flourish as Fincher has to get on with what happens next. This isn't so much of a criticism on David Fincher as it is on the idea of adapting Stieg Larsson's book into a film, its too jam packed.

For me it is getting a 8 out of 10 although I'm sure there are many out there that will disagree. The story captivates and leaves you guessing and the acting is superb. The main problems stem from the original book as opposed to the film so its hard to blame the makers of the film as they do the best with what they've got.  If Fincher keeps this current form up (he directed the Social Network, Se7en and Fight Club) then he may well be in the running to be my favourite director of all time. Good show old chap.
Powered by