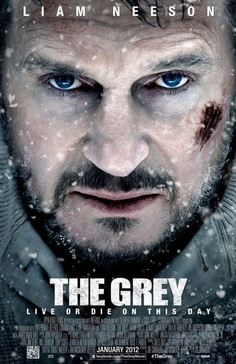 After watching the trailer for this film I was left with one image burned into my brain. One of the best things committed to film in decades, possibly ever. Liam Neeson punching a wolf in the face. Liam. Neeson.Punch.Face.Wolf. With that concept the film seems like it could have gone down the ridiculously silly route and been called "Wolf Puncher" or it could go all serious. Usually I would be hoping for a ridiculous action film where Neeson is fighting off hordes of wolves using his bare hands, think Taken but with wolves, but on this occasion that's not what I was routing for. What was delivered was a whole lot better than I expected.

The film starts off with Neeson as a depressed security guard type fellow who protects the workers at an oil plant that's a plane ride away from anywhere. We see his job as pretty much having to snipe wolves so they won't kill the workers. He seems pretty down about it all and in an opening monologue, which is a letter to his wife, gets all emo saying that life is bad and people are dicks. Then he puts a gun in his mouth. So straight off the bat this doesn't seem like its going to be an upbeat, care-free affair. Spoiler, he doesn't actually kill himself because then the film would be about 2 minutes long and not actually that entertaining.

The plot then kicks in and his plane home crashes in the middle of somewhere cold where no-ones about...apart from a massive pack of wolves. From there on Neeson and survivors must fight to survive the cold and wolves using homemade weaponry(rifle shells on a stick, tied together clothing and smashed bottles)  and Neeson's know-how.

Whilst at first this may be seen as a man vs wild type film it slowly turns into a deep film about the psychology of men in this type of dire situation. Each character gets time to be fleshed out with somewhat of a backstory which is no mean feat in a film with 6/7 main characters although it is of course Neeson who the film focuses on. I mean with Liam in your film how could you not focus on him? If I had made a film like Love Actually that had Neeson in for a few minutes I would have re-written the script and called it Neeson Actually. But I digress, the film deals with Neeson's past with slow reveals and heartfelt monologues as he becomes less of a loner in the group and more of a friend.

This film is a manly film really, where manly men do manly things whilst manning at each other. All the main characters are men, whilst all the things they do to survive seem to be stereotypically manly but this isn't a Rambo film. It's more like real men, as in the film shows what you would actually do in the situation they are in which creates a greater sense of empathy and unease due to the potential realism of their situation.