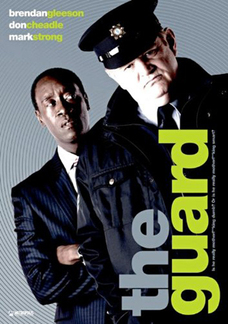 In honour of this film I plan to give it a f***ing expletive laden review. The film is f***ing Irish. straight of the bat that's what you need to understand. If you don't understand an Irish accent you are going to struggle through this film, you're pretty much f***ed.

The film stars Brendan Gleeson as a nihilistic Irish cop who's used to little f***ing crimes but then is confronted by a major f***ing drug deal and the film deals with how the lad pretty much doesn't do his job and how Don Cheadle tries and fails. Straight of the bat this film is funny as f***; its offensive, crass, politically incorrect and out and out hilarious, no wonder its operating on a 95% fresh on rotten tomatoes, that's f***ing fresh. Its also become the highest grossing Irish film of all time so theres that as well.

Brendan Gleeson doesn't get enough credit in the acting circles, the dude's been in some f***ing great films and stolen the show in almost every one: Gangs of New York, In Bruges as well as Braveheart. He plays the s*** out of this role and you can tell he's enjoying himself (especially in the scenes containing scantily clad women) and that comes through to the audience in his performance.

All the cast throw in a good showing, especially the vastly underrated Mark f***ing Strong (who I don't think will ever play a good guy) who plays a seemingly depressed drug kingpin figure who longs for a bit of action and has become bored of the whole pointlessness of all the drug dealing business. Then there's Cheadle who unfortunately doesn't have much to play with as he's confined to the straight-laced logical one in the film. The film wouldn't work without his voice of reason but he comes across as a rather forgettable character without any true development apart from maybe lightening up a little, but that's a necessary development in all buddy-cop style films.

Not that this is a buddy cop movie, this is a dark comedy. I mean not too dark, but its not something you want to show the children, its an adult orientated movie. Haven't sworn in a bit, f***ing f*** c*** w*** q*** j*** i*** v*** e*** w*****. Alright some of those weren't actually swear words but still. It's not just comedy though, there are true aspects of pure character development and even quite a meaningful deep subplot about Gleeson's dying mother which is somewhat poignant and beautiful even if the rest of the film may be a bit smutty. As I've said before very f***ing Irish.