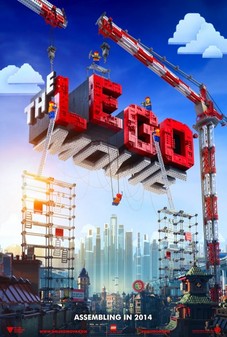 I never made what it said on the box. Couldn't be doing with all those instructions. When I Lego'd, I made a man with a really long neck, or the biggest tower I could. Of course these were all the stupidest looking things imaginable and there was no real artistic flair to them but to a 7 year old kid they were masterpieces, pieces to rival the greatest work of Da Vinci, they'd make Picasso rethink his art style. Why is any of this relevant? Well this film was pretty much made for me, I can't tell you why but it was. Just bear that in mind throughout the review whilst I gush over all the brilliance of this film and maybe take everything I say with a little bit of salt. I am by no means an objective reviewer, I am entirely and completely subjective.

Essentially the film is awesome, If you're a kid see it, if you're an adult see it, if you're a man child hybrid go see it, if you don't like fun and silly jokes and Batman then maybe don't go see it...and get out of here you, your kind aren't welcome on this blog! the Lego brand has been a lot more than Lego for quite a while making fun video games and Lego (insert popular franchise here) films, which in general have all been pretty good and a little bit of fun, but a little more kid orientated. This is their first big budget movie and thankfully it isn't about a Lego something. It's about Lego.

The plot sees our hero Emmet, voiced by Chris Pratt (who is in everything now) who is just an ordinary Lego living his Lego life as a construction worker and being content with being an ordinary everyday schlub. He then becomes embroiled in a plot greater than him to stop Mr Business (the president of Lego...town? I can't remember where this is set) from ending the Legouniverse as we know it. Thankfully he's aided by loads and loads of fun characters. Morgan Freeman's old wise mystical stereotype is spot on, Elizabeth Bank's Wildstyle is fun, Nick Oferman's pirate is spot on and Will Arnet's Batman is cast perfectly.

Whilst the film is chock a block full of zany jokes and humour it's also an ode to creativity, a film that parody's 'the chosen one' destiny tales whilst also being a brilliant example of how they can work. The two directors have essentially gone around making films that could be corporate driven lowest common denominator fodder but have striven to create incredible funny, endearing and out there comedies (21 Jump Street, Cloudy With a Chance of Meatballs), so that this film is all of those is no accident. ~There actually seems to be passion behind their direction as opposed to simply using it as a vehicle to sell more Lego.

Are there problems with the film? Yes a few, the ending does get a little bit soppy (in my opinion it totally works and makes you consider the film completely but I can see why people would think otherwise), the story is pretty generic and a very strong character gets defeated by gum (genuinely one of my main problems with the film) but all this doesn't really matter that much because the film's fast energy keeps you gripped throughout and doesn't outstay it's welcome.

Also it looks beautiful, there's been real effort put in to make this look like a massive budget home made film. All the characters are animated to look like they're actual Lego along with all the environments (Lego water looks fantastic). It may be a little difference but it just differentiates it from all the other meh animated films out there. Also I think this is the first time I've seen batman played as a comedy character, a kind of parody as the gritty image Hollywood has given us in the Christopher Nolan era, when he started out all Adam Westy and campy.

Go see the film, it's reet good 9 Lego Blocks out of 10
Powered by