My plan was going to be 5 comic book adaptions but I found it impossible to limit it to 5. I always have had a special place in my heart for comic book adaptions, be it because of the geek mythology that surrounds these movies or because comic books translate almost perfectly into film. Just to make this clear comic book adaptions range far and wide and are not limited to just superhero movies. It is true that until about the mid 80s the majority of comic book adaptions were superhero films but only one of my choices dates before this era. Although its not a new thing to adapt comic books, it has become a much more mainstream form of film-making, especially with the Dark Knight's claim to being one of the best films of all time. Anyway enough with the introduction, lets get listing mother flippers. 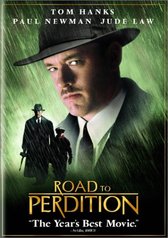 10. Road To Perdition
"That film wasn't based on a comic book" I hear you say. I've done the research my amigos and Road to Perdition is based on the graphic novels of the same name by Max Allan Collins. I know right, first pick on the list and already your mind is blown. This film portrayed Tom Hanks as a bad ass, and this is one of the main reasons I have placed it on the list. I mean I love the work that Tom Hanks does and I'm sure that some movies have tried to portray him as a bad ass but this film is really the only one that truly succeeds (I completely forgot about Saving Private Ryan when i wrote this part, I mean the guy takes on a tank with a pistol, that is ultimate bad ass). It is an especially important film for him now that Larry Crowne has rolled around and its nice to watch this film just to know he can act. The acting, action and setting in this film complimented the comic books perfectly and while somber in tone and more than a little heartbreaking, this film was very good, if you haven't seen it, do it. If not for me for Paul Newman, he's brilliant in it. 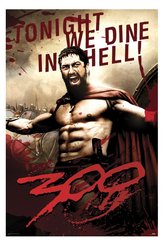 9. 300
I find it hard to describe this film without the words awesome, gore or six packs. This film knew the tone it was going for and hit it perfectly. There's no deep intellectual side plots or emotional involvement. This is a bunch of muscley dudes cutting up a bunch of less muscley dudes in slow motion and shouting uber masculine things that have become embedded in our popular culture. Just recently at a metal festival while walking around I heard one man shout "Spartans what is your profession" to which about 30 men at the same time all shouted back. It is true to a point that Zack Snyder deals with style over substance and this film does seem to be going down that path but when the style is this good then who cares? On a side note, how is the guy that directed this film going to be directing the next superman? Although how awesome would it be to see a superman aimed at mature audiences with plenty of gore and super sex scenes.

8.Watchmen
Time for another Zack Snyder film already? I know I'm spoiling you but the guy is just good at what he does,which is mature flashy film making. The action was brutal, the costume and setting design fantastic and the premise superb. This film wins my medal for favourite opening credits of all time where Bob Dylan sings over a number of freeze frames showing the alternate history of the Watchmen's world. Unfortunately I was never aware of the comic's so the awkward narrative structure perplexed me and the disappointing unresolved ending pissed me off a bit, especially because in the comics there was apparently a giant squid, that would have been freaking awesome. But all in all Watchmen may not be the best superhero movie of all time but it is definitely up there in my ratings

7. X-men
While it's true that I haven't been a fan of everything this franchise has produced, the original film that started it off still has a special place in my heart. The way that it developed the characters and showed the negative effects of superpowers had never fully been put into fruition in superhero movie adaptions. It also gave birth to most people's favourite superhero of all time, the cigar smoking, adamantium claw having, regenerating Wolverine played to bad ass perfection by Hugh Jackman.

6. Superman
Alright I'm going to be straight with you guys because you've read this far. I don't remember this film because I last watched it about 8 years ago but I remember it was good and I have to include it on the list because it pretty much set the bar for all other comic book films to compete with. Christopher Reeve kicked ass if i remember correctly and its still the best superman film to date, Zack Snyder's challenge in 2012 is to beat this films level of awesome-asity.

5. Spiderman
Now this film I remember. Sam Raimi of Evil Dead fame finally got given a big budget and he didn't disappoint. The casting was superb with Tobey Macguire's perfect nerdiness, Willem Dafoe's menacing Green Goblin and James Franco's Harry Osbourne. This may have been the film that started my true love affair with superhero movies...even if the 3rd one sucked as it usually does in superhero movies. This film, like superman seems set to be given a gritty reboot, this time with Andrew Garfield (The mate from Social Network) stepping in as Peter Parker and Emma Stone (Easy A, Zombieland, Superbad) playing Gwen Stacy. It's an interesting choice of casting but I can't believe that it will ever beat the great feel and iconic moments of the primary Spiderman movie. 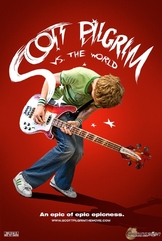 4. Scott Pilgrim Vs. The World
There may be some controversy over my choice to place this so highly on the list, well I say controversy it's not like it will be in the headlines of the newspapers tomorrow, but some of my tens of readers may disagree with me. Well this film freaking rocks and is probably the most loyal to its source material on this entire list. It doesn't hurt the film that director Edgar Wright (Shaun of the Dead, Hot Fuzz, Spaced) helms the F*** (see I'm keeping this family friendly now) out of this film. With ridiculous fight scenes, awesome geek bait (like calling Scott's band sex bob-omb) the whole film just appeals to the geek inside me and inside all of us. Cera finally plays a role that isn't just Michael Cera as he actually becomes a relatable character with flaws that has to defeat 7 evil exes to go out with this girl. Alright maybe that part isn't so relatable but the film goes at the subject matter with such aplomb that it doesn't matter. The funny bits are funny, the action bits are actiony, the nerdy bits are nerdy. This film Kicks ass....and talking of Kick Ass 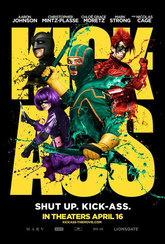 3. Kick Ass
It's at this point that I'm regretting making this list 10 films long because my brain has started to hurt, but the thought of people actually reading down to this point helps me soldier on. Anyway this film is called Kick Ass. It Kicks Ass. All you need to know. Its also the best thing Nicholas Cage has done since Lord Of War, and introduced the world to the Kick Ass-itude of Chloe Moretz who plays the swearing, brutally violent Hit Girl who is almost reminiscent of a more mental Mathilda from Leon. It doesn't hinder the film that it may have the best music score with help from Henry Jackman and John Murphy as well as the prodigy.

2. The Dark Knight
You knew this film was coming didn't you? The question was whether I was going to make it number 1 or not and I pondered it for a long time (that's why this post is 3 weeks late) but I decided that the number two post was sufficient. It is true that this may well be one of the best films of all time with some brilliant acting from all involved and of course Heath Ledger's legendary performance as the deranged Joker. I put this film at number 2 simply because I believe that the event of Heath Ledger's death may have blown this film slightly out of proportion. Don't get me wrong its a fantastic film but it seems to be held now as the holy grail of comic book films and people forget that Batman Begins was nearly as good as this film and that the films should be enjoyed for what they ae, not so much all that surrounds it. If we do that then the third in the trilogy will never be able to live up to this. 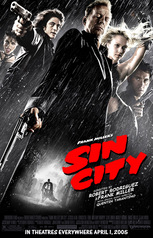 1. Sin City
That's right we've made it to my number 1. Its been an emotional journey and I'm sure the suspense of finding out number 1 has been unbearable to here it is, Robert Rodriguez's adaption of Frank Miller's Sin City. Just to show you how many awesome actors there are in this film, I'm just going to name some. Chances are you may have heard of them: Bruce Willis, Michael Madsen, Benicio Del Toro, Clive Owen, Mickey Rourke, Jessica Alba, Rosario Dawson, Josh Hartnett, Rutger Hauer, Elijah Wood, Devon Aoki and Michael Clark Duncan. If that many awesome actors agreed to take part in this film then it must be bloody good. The choice to film the whole thing on green screen paid off and allowed Rodriguez to create one of the most brilliant comic book adaptions of all time with brilliant atmosphere, fight scenes and some laughs along the way. Sure the fact that its 4 stories in one makes it a little long and may be a bit disjointed but the way that the stories intertwine make it very reminiscent of a Tarantino film, but dare i say it, better.