All my UK readers (which I assume is all of you) are currently experiencing a horrific torrential rain downfall I imagine with summer leaving us and the Sun very much not having his hat on. So if you're stuck inside crying about the fact that you can't go frolic, here is a list of the films to cheer you up and make you a little happier 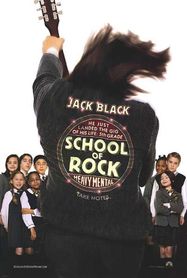 5. School of rock
Has Jack Black ever been in a film that isn’t feel good? The man is incapable of being serious really, even when trying to be serious (a la delivering the “twas beauty that killed the beast” line in King Kong). This film was the launch pad for Jack Black’s movie career of late, although it could be argued that his best film, High Fidelity, was actually the launch pad. The film follows a group of seemingly middle class private school kids (although I have never seen a private school with such an array of children, looks like they needed to tick some diversity boxes) this film makes you feel good all the way through. From Jack Black’s bumbling down on his luck rocker, to the kids’ progress from misfits to rockers, the film throws out some hearty laughs and some warm moments. The word of the day of this movie is rock, possibly may be the reason it’s on this list. It’s hard to feel bad with Zeppelin, the Who and Stevie Nicks pumping out the stereo. Although the pre-ending has the band *spoiler* not winning the show, the ending provides a much more heartwarming premise where an actual long term solution is found as opposed to a “we won the big thing we wanted to, now everything in life is going to be fine and dandy”. And speaking of not winning in the end but giving a heartwarming ending. 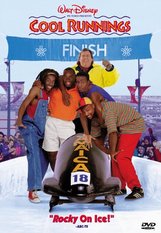 4. Cool Runnings
If you haven’t seen this film you do not own a TV. It is broadcast so often and there’s a good reason for that, because the whole thing gives you a warm fuzzy feeling inside and one of John Candy's finest performances plus it’s one of the few films featuring Jamaicans where someone doesn’t say something along the lines of “eh maaan, light up that spliff yo, Bob Marley Rastafari, Jah”, so its always nice when a film breaks the stereotype. Speaking of breaking the stereotype that’s the whole message behind this film. A team from a scorching hot country compete in the bobsled team in the cold, hilarity ensues. Hilarity does indeed ensue and everyone is happier for it. It was also one of the first cutesy type happy movies where the good guys actually lost in the end, although it challenges the idea that winning means coming first, it states that winning means respect and perseverance as the team crash but continue to the finish line while carrying their sled as everyone applauds. If you don’t feel good after that then you’re a monster. Or high “Rastafari!” 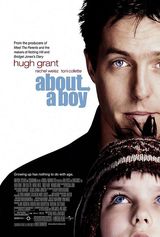 3. About A Boy
Alright I am definitely going to lose my man card after putting a Hugh Grant film on this list, but I don’t care anymore, I feel too good after thinking about all these films to care. Now this film is all about the buildup, like any good feel-good film you need to go through some hard times before you can achieve enlightenment. The film follows a bloke who wrote a song once and is living off royalties and a little kid with a manic depressive mum. A recipe for happiness if ever I did see one. It’s brilliant turns from Grant, Toni Collette and a young Nicholas Hoult that force you to form real strong attachments to these people and sure you see them suffer and do rather annoying things throughout the film but without the humanity this provides the film would flop in the last 10 minutes. Also if you’re female I’m such Hugh Grant’s dashing looks don’t hinder him….does anyone know where I go to return this man card? 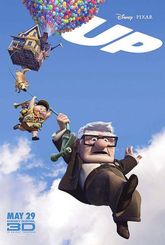 2. UP
Alright I know this whole list could have been made up of Pixar films, they’re the boss of feel good films as they are masters at creating characters that you form emotional attachments to and really care about succeeding. I had to choose Up just because of the feel goodyness of the whole film mixed with the “apocalypse now”-type twist to counteract all the happy happy stuff. The feel goodness can only truly be achieved after tragedy and I think that the opening sequence of Up would give any other tear jerkers a run for their money. It’s been proven time and time again that Pixar can reduce anyone to a blubbering mess with relative ease (although I may have been the only person ever to shed a tear during Cars…. Come on the town was falling apart and there was sad music….f*** you guys). Why then with such soul destroying sadness does this film make it onto the ultimate feel good list? It does this through a journey, of self-discovery and learning. If you see a character who you have real emotional investment in flourish into a likeable and happy human being, you’re always going to feel good. This film is freaking awesome (even if Haydn complained because there wasn’t enough action…don’t think the kid really gets Pixar films). 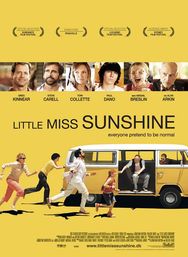 1. Little Miss Sunshine
A little indie gem that has seen a massive influx in viewage over recent years. If you haven’t seen this film you really should. It’s a rare thing for Steve Carrel not to play outrageous characters these days, but the understated suicidal, homosexual, ex-English professor of this film really stands out. As do all the performances from Greg Kinnear’s absolute hopelessness and drive to be a “winner” through to Alan Arkin’s incredible, outrageous grandfather and Abigail Bresling’s naïve Olive. The film follows a little girl who enters a child beauty pageant and it’s clear she’s more “real” than the other girls. It’s seemed to be a theme in this list that the feel-good aspect doesn’t come from the winning of the central goal as that doesn’t show any lasting character progress. You can say all you like that the underdog winning against all odds is a great feel good story but it doesn’t usually leave such a lasting emotional impression than if they lose, but don’t care if they lost because they’ve all become better for it. This film was made in a reaction so an Arrrrrrnold speech where he said something about hating “losers” and that everyone must be a “winner”. The directors and I hate this view on life so they made a film about the middle, about surviving, about how love and companionship between a group of people is more important than any trophy out there. I don’t know about you guys, but I feel good after that, peace and love guys and non-guys.