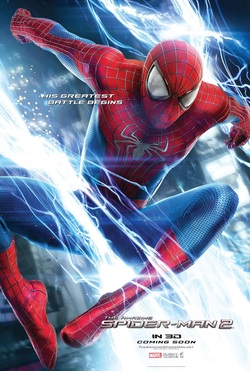 I think the argument is still valid that this film isn't necessary. We had a Spiderman franchise and it was...pretty OK. There were moments of greatness (Spiderman 2) there were moments of goodness (Spiderman) and there was Spiderman 3 (Spiderman 3), but they happened. It's a dangerous precedent set that if a film series starts failing a bit you immediately hit the reset button but that's the way of Hollywood I guess. As long as the new films are good everyone should be happy, right? Well this film is good...ish, maybe, to an extent....um.

If you watched the first (or...fourth?) Spiderman film you should know roughly what to expect by now. Although whilst Andrew Garfield was the geeky Parker (who got the hottest girl, skateboarded and wasn't really geeky at all) now he's hip and cool and enjoying being Spiderman (in a slightly less cringey way than the dance scene in Spiderman 3).

The plot essentially follows Garfield's love of Gwen Stacey and then a conspiracy theory that doesn't really have any right being there. It's a similar problem that the first had in it's narrative that everything has to be tied together.  Peter or Gwen have already met pretty much everyone who is related to the plot in some way apart from maybe Rhino (who is actually pretty accurate to the comics book i.e. is stupid, Russian and not integral to the story in the slightest).

Marc Webb, the director of my favourite romantic comedy 500 Days of Summer, handles all the love stuff with aplomb, Garfield and Stone have a recognisable rapport together (maybe because they're getting it on off screen) and the action scenes are all pretty epic and work well. There's also some brilliant comedy beats and the physical comedy actually works this time around. Therefore the film should be brilliant? Maybe not.

The issue I have with the film (which many other reviewers haven't as much) is that its a few seperate movies in one. Having a love interest in a story is fine, it's been done plenty of times and been done well, and it's integral to this Spiderman story, but its still meant to be a comic book movie and the bad guys therefore suffer from the cut down screen time. Electro could actually be a brilliant villain if he was explored in a bit more depth (and if dubstep didn't play every time he came on screen) and Dane DeHaan has shown he can do corrupted villainry in the underrated masterpiece Chronicle, but hasn't got enough to do here. The progressions from neutral to evil all feel a little rushed due to all that time the film had to focus on Garfield mumbling his way through heartfelt conversations and stalking.

There are some brilliant bits though which pretty much make up for it and it was certainly an enjoyable experience, moreso than the first but less memorable than the first two of the first trilogy. It's meant to set up a film run by the bad guys, the sinister six, meaning DeHaan will get to get to grips with the character a little better which means this film has to juggle spiderman focus and bad guy focus which can work like in The Avengers but at times kills the pace a little here. Just when you think the story's going to kick on there's an awkward conversation with Gwen or there's a bad guy explaining very vaguely that 'somethings going to happen at some point for some reason and oh boy it's going to be so evil'.

Good film mind you, bold choice to follow certain storylines (that was a spoilerish) and brilliant action scenes, just didn't gel like I hoped it would and felt like it ran on a looot longer than it's 2 hour run time. Also in an ideal world all Marvel movies would be owned by the same companies meaning we could have Spiderguy making it to the big leagues. Spider7 out of Spider10.
Powered by