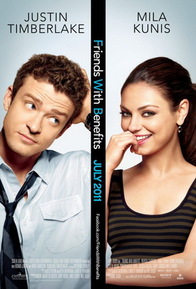 I don't mean to be crude or forward about this but I must first bring to light the thought on the minds of all males who watch this movie: Mila Kunis get in my bed. Now reverse that to females and I'm pretty sure their minds are saying: Justin Timberlake talk to me about your feelings and then sing me to sleep, lol JK get in my bed.

Now the above is pretty much the basis of this film, the filmakers thought "alright lets get two incredibly hot people, make them do sexy things and wham bam we got a movie" and surprisingly they actually got it right. The film follows two people too busy for a relationship so they "f*** buddy" up and what follows is a surprisingly touching film (in both senses of the word). They have their ups and downs and fallings out and make ups and they both get naked a lot.

The plot isn't what's important here as it follows a standard "oh this isn't an average rom-com, we're taking the p*** out of the cliches" but then going ahead and ticking off almost every cliche box that the genre has. The main pull is the effortless chemistry that seems to come off the two leads (I've recently been informed that these two are doing it in real life so this may be the reason). These two are probably two of the most likeable players in hollywood currently, and also two of the hottest. I'm not gonna lie when Timberlake took his shirt off I, for a millisecond, pondered whether going gay was out of the question, but then Mila Kunis's bare rear end wondered back on screen and my mind returned to drooling over females.

Now I keep saying this film is a standard rom-com but it has heart, which is more than I can say for almost every single rom-com out there at the moment. The way it slowly backs up the characters so they find things out about each other at the same time that we do is actually skillfully well done and means we can understand why their bond grows so strong. The best example is Timberlake's character's Dad having contracting Alzheimer's and Justin gets to show off his acting chops and I must admit, I'm damn impressed. A touchy subject is dealt with seriously and with great decorum in a film about people f***ing each other. Also Woody Harrelson is hilarious but at this point in his career do we even need to say that?

In conclusion, cliche'd perhaps, but its rare to find a rom-com with this amount of heart that can also make me laugh so I'm going to give the film a cheeky 8 out of 10. Now if you'll excuse me I have to get back to my Mila Kunis shrine.