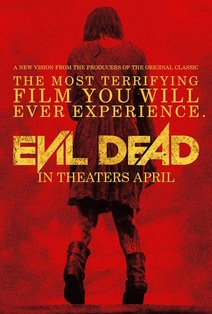 A little while ago a fellow called Sam Raimi decided to make a horror film even though he had next to no money. He hired is brother Ted and his high school friend Bruce Campbell and also Bruce Campbell's chin. With this they made an incredible low budget horror flick that completely reinvigorated the stagnant horror scene whilst also reflecting everything that had come before. What followed was a semi-sequel that was actually a higher budget remake with humour and legendary catchphrases being brought more to the fore. This means that some people may have entered the cinemas expecting a return to Army of Darkness levels of goofy with mini evil Ash's (Bruce Campbells) jumping around fighting human size Ash. Up until the scene where the woman cuts off her face.

Yes this is a retread of the first Evil Dead in so much as its an out an out horror film but while the original is almost charmingly gory by today's standards this film is pants wettingly horrific. There are still some throwbacks to the original few films with its love of power tools, its book of the dead and the Oldsmobile making a cameo but it isn't exactly the same story. The director has described it as kind of taking place in the present in the same cabin as the original but not in the same cabin because there would be too many coincidences so not in the cabin so forget I said it... That was pretty much the gist of it.

The film actually makes some smart moves to modernise the film with Mia, the one getting all possessed n that, being a recovering drug addict and a bunch of friends and a brother coming together to help her go cold turkey in the woods. That means when she goes all demony their thinking 'pretty brutal withdrawal symptoms there' not 'ahhh damn I wish i wasn't about to become the devil's bitch' which is quite interesting but when s*** starts kicking off this isn't really revisited all that much because there's too much death to be handed out. So the plot doesn't really keep its relevance for that long and there is some character arcs and back story to it all with some familial relationships but you tend not to care so much who this person is getting their face f****ed up like this.

Like many films recently this is a possession film but not a p**** 'oh my god the door opened a bit so I need to shake this camera around for another hour' kind of a possession and more a 'hi honey how are you...why are you cutting off your face honey? Damn those pesky demons' kind of film. A buttock moistening type of film which harkens back to old school horror flicks building up to tension then having the horror implied at, except the horror isn't implied at. Up until this point a lot of horror films deal with the imagination and those are the most successful but nothing is spared to the imagination, its all displayed in extreme close up gory detail.

You may have seen that I've barely mentioned the plot because.... well that is certainly not the film's strong point. There's some vague references to the book of the dead and its certainly more in depth than the first 2 movies but ultimately you won't be gripped to find out what happens next. It is unfortunate when these types of films don't really have a brain but this is less psychological horror than full on old school Grindhouse horror so I guess its to be expected, no one praised Friday 13th for its brilliant wit.

The character's also leave a lot to be desired but that's simply because all this horror nonsense starts pretty early on and the character development gets put aside pretty quickly in place of character dismemberment. There's no true main but its all relatively well acted throughout and chock full of 'No don't go in there you idiot' moments that are kind of a guilty pleasure. Also its a nice way of distancing yourself from the action e.g. if in real life someone was crawling towards you with a shard of glass in their hand intent on some face stabbage you'd probably think 'hmmm time to get up and move as opposed to lying down and flailing' maybe that's just me though.

All in all a very gory horror film with some scenes of suspense and some bad assery but lacking in memorable quotes or much character in general as it takes a little too much glee in destroying them. It is however, still butt clenchingly brilliant stuff. If you're squeamish this isn't your film but if you are a bit of a horror junkie and want to see how far you can push yourself. As good as the original at least (the comparison with 1 and 2 isn't really possible) I give it a groovy 8 out of 10
Powered by