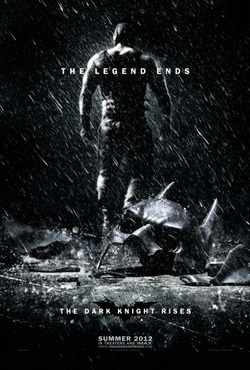 So it's here. It's finally fricking here. Arguably one of the greatest film franchises of all time (the Nolan Batmans, not Batman in general) has drawn to a close but does its finale live up to the insurmountable hype and does it do the trilogy justice after following one of the best films ever made? I genuinely don't have an answer for that. Is it an epic finale? Yes its epicness is more epic than any comic book film we've ever seen. Is it a brilliant film in its own right? Yes, its visceral action and brilliant characterisations see the film reach a height most films should aspire to reach. Is it the best Batman film in the Nolan trilogy? No although I'm not saying it's the worst, I'm just saying that its the 3rd best....out of 3.

Let's be honest, would any film ever live up to the amount of hype placed on it (e.g. Prometheus), but even if at times it doesn't, at times it really does and then some. Nolan has obviously decided to go all out on this one; no one makes films like this anymore. It's an epic, sprawling beautiful ending to an incredible trilogy and then there are some bits where nothing really happens.

Whilst its predecessors planted their feet firmly in the confrontation between Batman and an adversary, this film delves into the mindset of the citizens of Gotham, hell Batman's only in it for like 20 minutes. If you have been trying to stay clear of any plot details then its probably best to see the film then read on, because you want to see this film. It's the film you deserve, not the one you need.

When I heard Nolan was putting Bane as the main baddy I thought rejoice! Finally people might see Bane as the master tactician like he was in the comics and not the bumbling oaf that Joel Schumacher decided that he was. I was a bit skeptical too because following the Joker how could Bane compete? Let me just get this straight, Hardy has proven himself time and time again as one of the greatest new(ish) actors of our time and Bane is one of the greatest villains of all time. Everything from his characterisation, his intent, his intense physical presence and his intriguing, authoritative voice all come together to create a thing of nightmares. He's just so freaking bad ass. All this chat about no one being able to hear him, well then turn up the volume, it's not that hard.

Speaking of acting talent lets just reel off a few: Gary Oldman, Morgan Freeman, Joeseph Gordon-Levitt, Miachael Caine, Tom Hardy, Christian Bale, Anne Hathaway, Marion Coitillard, Cillian Murphy, Liam Neeson (Raas al Ghul WAS immortal in the comics), Tom Conti, Matthew Modine. Alright now I'm getting into names most of us haven't heard of but I think you'll agree that there hasn't been an all star cast with this much raw acting talent since New Years Eve (Bon Jovi AND Ashton Kutcher). They essentially carry the film during the not so hot moments where it would drag on a bit if Michael Caine wasn't so awesome at delivering emotional monologues.

The action is breath-taking from the epic explosions to the wincingly painful hand to hand combat scenes, especially the Knightfall moment (nerds'll know what I'm talking about) and the story completely solid and epic although there are still some niggles that don't so much get in the way of the story or film but may get some nerds annoyed. They alter the backstory of Bane at the end, and everyone seems to figure out who Batman is. Seriously, like everyone is just like you're Bruce Wayne! It's quite strange when random people can be like "oh he's Batman" but the whole police department are so inept that they can't.

On a side note the score of this film is suitably epic but remember that bit in the trailer where the music goes Duuun Dun Duuuuun. Yeah be prepared for that every time something happens. That's not a major criticism it's just that Hans Zimmer has a certain style and this is his style in full effect.

If possible, see this film in IMAX as that really captures its epicosity. Whilst the film is by no means flawless it is a brilliant ending to an amazing series and whilst it doesn't surpass its predecessors it certainly does them justice and you should see this film. It's not the film that you deserve, but not the film you need. It gets a positive 8 Banes out of 10. Also a total shame that the film's release will become synonymous by such tragedy in the Colorado shootings. Such a horrific thing to happen and respect for Bale going to visit the injured off his own back and not as some kind of publicity stunt. Maybe they should put the shooter in a room with Bale dressed as Batman and lock the door?
Tweet