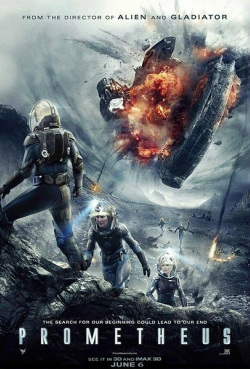 Watch Alien before you see this film. It's not ridiculously essential as this is a pretty loose prequel but its based on the same planet and also there will be moments where you point at the screen and say "I remember that!". Or maybe you won't because you're not as much of a nerd as me. Either way this film is a bit of an enjoyable space romp...well I say enjoyable; it's grim, unforgiving and brutal, not so much a family film then.

The film charts quite a while before the first Alien film and the writers said they pretty much started with the original in mind, but if you are going in for a repeat of the first few films you'll be very much disappointed, this is a film in its own right. More stand-alone than any of the Sigourney Weaver driven Alien quadrilogy with very little of the aforementioned "Alien".

There's obviously been some obscenely massive hype leading up to this film as Ridley Scott's Sci-Fi credentials (Alien & Blade Runner) ain't nothing to look down at and are certainly better than my efforts. So does it live up to the hype? Well that's debatable with some people calling it predictable and other's saying it's so damn pwetty and epic. I would place myself with the latter whilst kind of knowing what the former is talking about but not really agreeing with them, a bit like Christianity.

The film charts the ship Prometheus's journey to find the creator's of man (Religious overtones are so in right now) after finding some scribblings on a  cave wall. This takes us to the planet that is by and large not seen in Alien but is beautifully displayed in the prequel, although when they start walking around tunnels...it looks like tunnels. The world that Scott and co have created is immense and believable but this isn't Avatar, there's actually a proper original story underneath all that glossy niceness.

Following some of the previous themes in the other Aliens a lot of the film works of conflicts between the crew members. The slightly creepy robot Fassbender played to perfection, the sinister Charlize Theron who definitely has alterior motives and many more. This really is a stellar performance from the extensive cast from Idris Elba (The Wire, Luther) to Rafe Spall (Shaun of the Dead...He's gone from Shaun of the Dead to a Ridley Scott film, lucky b*****). On the whole the acting is brilliant although the film tends to suffer by making actors speak with different accents. The British Idris Elba pulls off the American accent flawlessly as we have seen him to before throughout the Wire but Rafe struggles a bit with the Americanness and the Swedish Naaomi Rapace plays...English I guess.

The film has three main things going for it, each displayed brilliantly. The incredible settings from the ship interior (even though it suffers from later film prequel syndrome where the technology is more advanced in the past than it is in the future a la Terminator), the twisting plot that combines intrigue, alterior motives, a bunch of crazy mad goings on and thirdly epic action scenes coupled with some brutal gore. Not the gore in the torture porn way but there is certainly a scene where Rapace... I'm not going to spoil it but it harks back to John Hurt's scene in the original and you will wince and not what to watch. That's a warning to the squeamish, I can watch saw and not bat an eyelid but that scene is horror at its finest.

Wrapping up, the film deftly blends action, brilliant CGI and some great performances from the cast; especially Fassbender's cold, calculating android and Elba's, I don't know how to describe him other than cool, pilot. At times the film may drag and certain aspects worked more than others with some characters not getting enough screen time to build a connection with but I would say that whilst it may not be his finest sci-fi to date, Ridley's done it again. 8 out of 10.