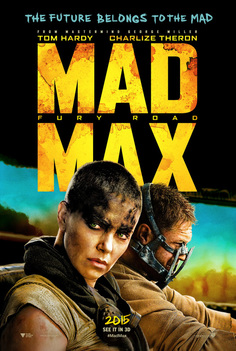 About a month ago I wasn’t looking forward to this. Having not seen the previous Mel Gibson fronted movies (out of negligence, not out of some anti-Mel Gibbo campaign) there wasn’t the nostalgia and CGI’d cars smashing into each other wasn’t really what I look for in a blockbuster. Then recently I read up on the film a little; same writer as the original (not that I’ve seen them but apparently they’re good), mainly practical effects, brought in someone who interviews real life people sold into slavery AND they pissed off the ludicrous men’s rights blog Return of Kings (http://www.returnofkings.com/63036/why-you-should-not-go-see-mad-max-feminist-road). F*** it, I’m in let’s watch it.

Jesus H(aroldfromneighbours) Christ that was incredible. Not often does an action film come out that is this balls to the walls committed to its craft. It kind of goes to show just how muddled and busy Blockbusters are becoming, it’s refreshing to have a film that doesn’t have 8 films attached to it that I need to see first. It starts off with a mini monologue, shows us what the world is like, then sets up the action and just goes form there and does not stop. I must reiterate, this action (pretty much) does not stop.

Thank god it doesn’t stop because this is some of the best choreographed action I’ve seen in a long time, mainly based in and around decked out moving vehicles. With over 80% of stuff made up without CGI the action really pops and looks visceral, and explosions actually look like explosions. When Tom Hardy’s head is inches from the ground whilst being dragged beside a hurtling War Rig, it feels like it’s happening because….it is happening.

In terms of plot it is used sparingly. There’s a big bad guy with some little bad guys, there’s Max as a drifter begrudgingly helping out Theron (who’s really more the heroine than Max, which is a great choice because she kills it) but apart from that this is a pure chase movie, but one that’s actually great at subtly building characters. Hardy communicates mainly in grunts as a closed off drifter who’s only goal is survival, but starts actually interacting with and trusting people as the film progresses and motivations become clearer.

And by jove this film is beautiful in a grotesque way. Vivid colour and iconic villains as far as the eye can see. Apparently the director’s first instruction was that the film had to be colourful because he, like many of us, had grown a bit despondent with the ol’ “it’s the future so it should be grey”. It’s obvious that Miller’s work with the high octane bloodbaths that are Babe 2 and the Happy Feet series. Actually even though the villains are grotesque and the violence is visceral, the film does just enough to keep to a 15 so the squeamish among us don’t have to worry about gore, it’s more the danger and thrill that gets you going.

Nicholas Hoult is also pretty good in it, his character arch is less compelling but it’s an interesting look into how people have dealt with this apocalypse and he does have some really affecting scenes. There are some nice flourishes with the secondary female characters, and some attempt is made to differentiate between them but by and large they are there for the plot.

All in all this is action at its purest with a surprising amount of heart and depth. There’s also a man playing electric guitar on a moving truck with a wall of speakers behind him. Also that guitar is a flamethrower. Rarely am I excited about new franchises but this seems to have what it takes; it's silly, it's serious, it's incredible, it’s mad. 9 out of 10.