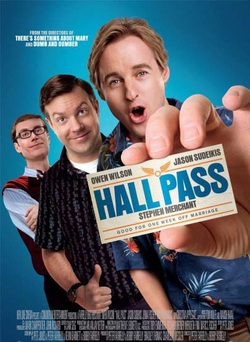 Nicky Whelan (latest series of scrubs) gets her baps out. That and Steve Merchant are the only two reasons to see this film, and the baps are out towards the end and Steve Merchant is underused and actually really bad in the film. Save yourself the time of seeing this film and just Google Whelan's breasts and play Portal 2 to hear Merchant on his best form.

A film is doomed to fail when not a single character is actually likeable. Hall Pass tries its hardest to portray Jason Sudeikis as happy go lucky and Owen Wilson as a family loving man, but it portrays Sudeikis as a dickhead and Wilson as...well it doesn't portray him as anything he doesn't seem to have any character.

Another problem with this film is the lack of actual humour throughout. Whilst watching it i laughed once and that was at an overtly crude saying. This is a consistent aspect of the film, it seems to be just crude as opposed to funny. If you are looking to laugh pick another film, if you want to see explosive diarrhea, a micropenis and cringe at some of the most boring "hi-jinks" in movie history then this is the film for you
I award it 2 out of 10 for the first two reasons i mentioned (I'm not talking about Steve Merchant)
Powered by